Part III of “Ferguson Unleashes a Movement for Racial Equality”

A wave of protests and discussions has swept across the nation as a result of the decision of the Grand Jury to not indict Darren Wilson for killing Michael Brown. When I look across my Twitter feed, I see post after post of peaceful protests going on around the nation. People of all races are uniting and standing up for racial equality.

But you’re not likely to see any coverage of this in the media. Unless someone is stealing a TV, burning a cop car, or there is a black teen hugging a white police officer, this movement isn’t likely to get any airtime.

The revolution will not be televised.

You’ll find plenty of discussions blaming Obama for instigating the riots, or Michael Brown’s stepfather for inciting violence, or the St. Louis Rams for disrespecting police (rather than standing in solidarity with a positive movement for racial equality). Jerry Springer upped the game on sensationalism long ago. The US media has been emulating him ever since. 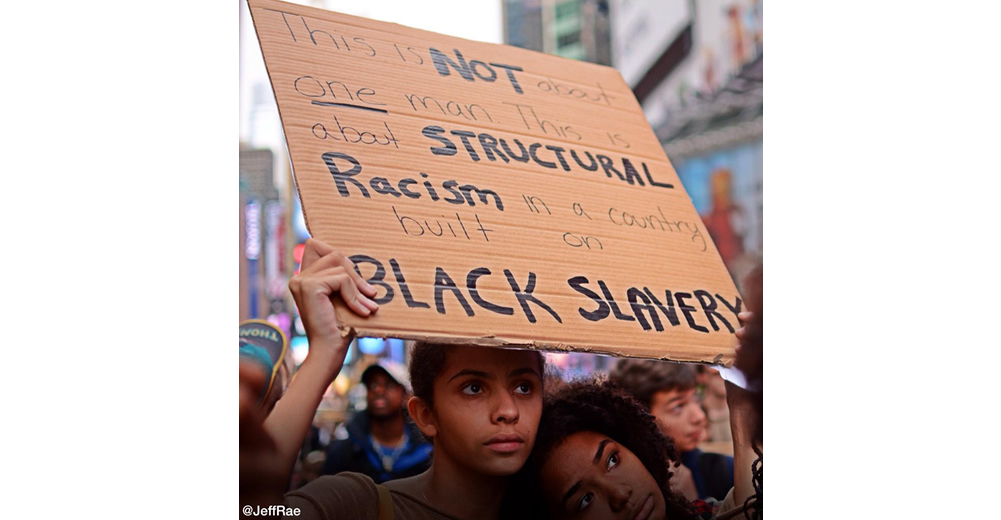 My primary stance since the Ferguson tragedy began is that I believe “white privilege” and “institutional racism” do exist in the United States and I believe we can and should continue to strive for a higher standard for racial equality.

I’ve been appalled by some of the reactions I’ve seen from the general public. I had assumed people would be mature enough to look beyond the individual cases of Michael Brown, Trayvon Martin, Tamir Rice, Akai Gurley and scores of others and recognize that something important is going on that goes far beyond each of these individual tragedies.

We have an opportunity to advance American society, like we’ve done so often before.

Instead, I’ve seen a whole new breed of racism brewing across that nation.

Perhaps we could find some common ground and a bit of balanced discussion. This issue of nuanced racism is not as black and white as it’s made out to be. It’s easy to use drama and sensationalism to make a point, or to avoid having a productive conversation at all. But it’s certainly not the type of behavior that has advanced us in the past.

I believe the white community still has a significant advantage over people of color when it comes to getting a job, receiving the benefit of the doubt, avoiding prison, feeling welcome, receiving respect, having the same opportunities, and so on. And for most of white America, this isn’t even a conscious initiative.

The most dangerous type of racism is that which is masked beneath proposed “truths” petitioned by our institutions.

When I talk about the need for more equality, to ensure equal opportunity, fairness and a more connected society, people are quick to say, “black folks just need to take responsibility for their own actions”. Indeed. We all do. No matter our race, gender, nationality or creed. However, that doesn’t negate the reality of the role white privilege still plays in our society today.

If you believe we really have reached the pinnacle of racial equality, it would stand to reason that we are also equally responsible for the events that led up to Ferguson as well as the ensuing rioting, protesting and discussions.

Why is everyone so quick to pick a side and get defensive? That’s part of the problem. Why can’t I say, “I think we can do better”, without everyone feeling the need to remind me of the great strides we’ve already made towards racial equality?

When MLK championed the Civil Rights Movement, I assume there were quite a few people that came up and said, “hey, we already abolished slavery, enough is enough”. Thank God he didn’t heed their attempts to dampen his spirit.

Could this be another time like that? A time when we need to continue to improve a dynamic that is paramount to the advancement of our society?

When I talk about police brutality, racial profiling within the police department and the propensity towards violence as the first response, everyone starts making a case for why “we must have police”. This is an antagonistic and immature response. When people say this, they are essentially saying, “We need police and it doesn’t matter how they act, we just need them.”

What issues are acceptable to discuss in terms of police behavior? Any? Or are they going to enjoy the same impunity for discussion as they do for rule of law? We need police, and they need standards and accountability. Does that seem unreasonable?

I’ve never advocated for anarchy or the eradication of police. Is it naive or anti-American to petition for less violence within the police force? I’m well aware that today the “the bad guys” are more violent and heavily armed. Is the best answer we have to just combat that with bigger guns and more violence? Where does it stop?

If you are fortunate (and deliberate) enough to have a happy, healthy marriage, is there ever a point where you decide it’s time to stop learning from each other and investing in the relationship? What about our relationship between races? Should it be any different?

There is a difference between angst fueled, destructive rioting and peaceful, purposeful protesting.

There is a time to protest peacefully and constructively for something we believe is important.

We have not yet reached the pinnacle of racial equality.

We have not yet reached the pinnacle of judicial practices.

There is a wave of passionate, caring people representing a wide variety of races that are peacefully uniting across the nation for the purpose of increasing racial equality. They are conducting sit-ins, “die-ins” and marches in public areas. They are boycotting certain products and services as a way of articulating a portion of the importance in their role in American society.

Does this sound anti-American? Does this sound radical, negative, irrational or detrimental to the American society? This is America, the land of the free, home of the brave. Isn’t this what we do? Isn’t this why we are the most influential country in the world?

We stand up for what we believe in. We defy mediocrity. We strive for greatness and idolize heroes like Dr. Martin Luther King, Mahatma Gandhi and Mother Teresa because they wouldn’t settle for anything less than a revolution. They pressed on even when people told them we’d already come far enough.

In many ways, the United States has already set the standard for equality across the world. Why would we stop raising that standard now? This is a time when patriots and revolutionaries have a profound opportunity to come together for one common goal; racial equality.

If you’re interested in seeing the magnitude of this peaceful movement for racial equality, check out the Twitter feed of New York based activist, Jeff Ray. This is coverage the media won’t show you.

Unfortunately, just after posting this, they released the verdict for the Eric Garner case where he was choked to death by Officer Daniel Pantaleo. Pantaleo has two prior lawsuits against him. The plaintiffs in both suits allege false arrest, unlawful imprisonment, civil rights violations and other charges. Furthermore, the chokehold was been banned by the NYPD long ago. Garner was not charged with anything and was not violating any laws. The coroner ruled Garner’s death as a homicide.

Once again, the Grand Jury chose not to indict the officer. The public is outraged, especially as tensions are already quite high. And they should be.