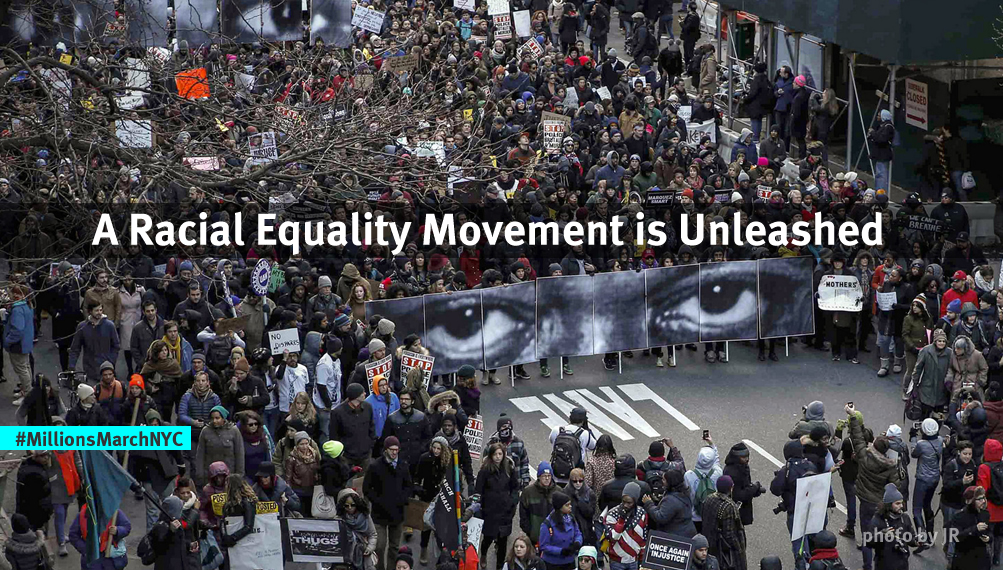 Part V of “Ferguson Unleashes a Movement for Racial Equality”

Continual awareness is crucial. Information, today more than ever, is power. And with power comes responsibility.

We are not fighting; we are resisting and creating a movement.

Against institutionalized racism, of which the antithesis is racial equality.

Against institutionalized impunity and promotion of police brutality, of which the antithesis is judicial reform.

What does judicial reform imply?

The Purpose of the Resistance

To resist institutionalized impunity, brutality and racism within our judicial system.

Towards equal rights and freedom for all humans and the necessary mechanisms and agreements for civil society to hold our institutions accountable for any threat or breech of those principles.

Ultimately, I believe the primary agenda of all governments should be to draw exponentially closer to an egalitarian society. This is not utopic thinking. If that’s the goal, imagine where the journey could take us, even if we fall short. What greater purpose could our government serve?

If the goal is ultimate control of the people through social and racial division, we’re heading in the right direction. If the goal is to achieve peace, prosperity and unity, we must resist, alter our perspectives and deliberately develop a movement in the other direction.

We need to remember what our governments were actually elected to do, and begin holding them accountable for it. It’s far too easy for society to become complacent and to just assume the government will keep itself in check.

“The price good men pay for indifference to public affairs is to be ruled by evil men.” Plato

I can’t think of any better way to say what I’m trying to say, than that. This is not just a cute quote from bearded Greek philosopher that lived long ago. His sentiments are just as relevant today as they were then, and unfortunately, the social environment has changed very little throughout the centuries.

Governments and other institutions have always been developed to control society. Typically this has been conducted through systematically fueling a national perspective of fear, scarcity and division through class, creed and race. Sound familiar? But we are a more advanced society now. Isn’t time “we the people” demanded a more fair and just system? Isn’t that what America has always been founded upon (on paper)?

I’m still dumbfounded by the constant remarks I hear from the masses. I have been an activist my entire life, but I have still been a bit blindsided by the level of complacency and indifference our society exhibits in an effort to cater to their pervasive lust for the illusion of comfort and safety, even when they are quite clear that it is in fact a self-defeating illusion.

If we are going to attain a peaceful, sustainable and united society, we must employ copious amounts of equality, patience and long term strategy. We cannot cook this up in the microwave in 30 seconds. I believe wars are the result of greedy desires for control and profound levels of impatience. If we were really concerned with developing relationships or aiding other countries, our tactics would be entirely different. But that has clearly never been the goal.

Imagine if our governments operated from a deep motivation to foster an egalitarian society (free, authentically democratic, equal).

Isn’t it time we, the people, demanded that our government realign their perspectives and consequent actions with this agenda?

I pray this movement continues to gather steam and does not dissipate through apathy and time. This should, and could be the second wave of the Civil Rights Movement. Remember, this isn’t just about black and white races. This is about deliberately engaging in the development of a peaceful and unified society. “Be the change you want to see.” If we all did that, we would manifest the society we want to live in.

Please get involved. Do your part to contribute to the society you want. Is there really anything more important we could do for ourselves or future generations?

Write a blog, join a peaceful protest or march, call your congress members, spread the word to your networks, utilize social media for something other than useless drivel. Do whatever you feel compelled and equipped to do. Below are some useful resources.

This is what “ubuntu revolution” is all about. This is what I’ve been petitioning since I was a teen, desperately striving for a more equal society. But today we actually have a movement that could make contribute significantly to that agenda. Will you engage?

This is everyone’s chance to truly be…human.

NAACP {National Association for the Advancement of Colored People}

Founded in 1909, the NAACP is the nation’s oldest and largest civil rights organization. From the ballot box to the classroom, the thousands of dedicated workers, organizers, leaders and members who make up the NAACP continue to fight for social justice for all Americans.

The ACLU is our nation’s guardian of liberty, working daily in courts, legislatures and communities to defend and preserve the individual rights and liberties that the Constitution and laws of the United States guarantee everyone in this country.

This is the hub for the current movement for racial equality and judicial reform. The more centralized and strategic our efforts, the more likelihood of inciting a powerful movement and shift within our government and general society.

Go here to see where there are protests going on in your area, or create a protest of your own.

Before attending an action, make sure you know your rights and check out the National Lawyers Guild (NLG) on twitter and your local NLG chapter for a local hotline to report police violence or receive legal support if you are arrested.