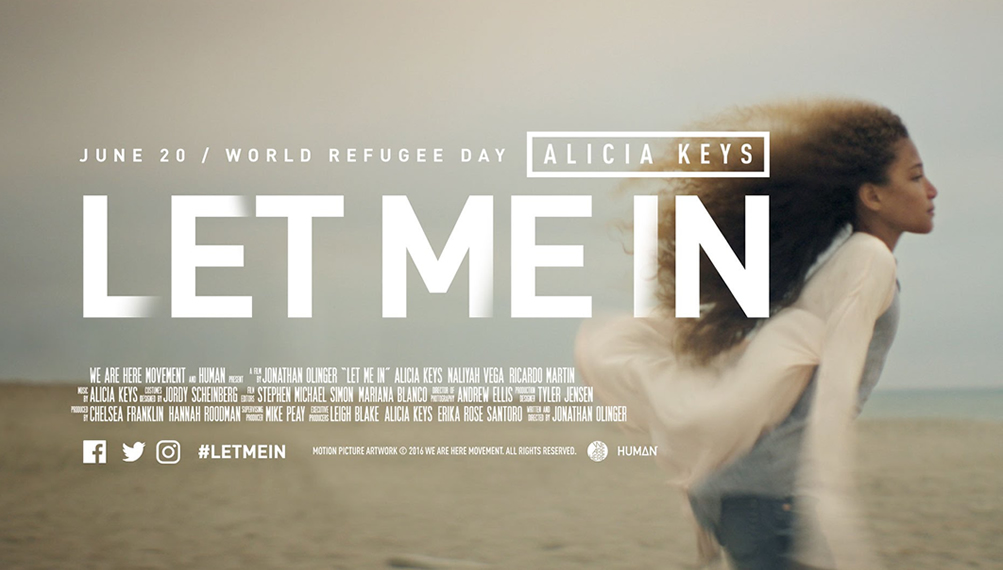 Our friend Jonathan Olinger at HUMAN recently wrote and directed the latest Alicia Keys video, Let Me In.

The film is a tribute to the refugee crisis around the world. There are more refugees today than at any other time in history. Half of them are children.

Despite all our technical advances, the exponential growth of these types of crisis makes me wonder if we’re actually evolving as a society, or going in the wrong direction.

What does this say about our global society? What priorities does it reflect?

I’ve been a philanthropist and activist my whole life. I’m painfully familiar with the constant need for humanitarians around the world to try and get the masses to understand that “those Africans” or “those Syrians” or “those Iraqis” are not other people. They are us. Humans. Just like you or your mother or your son or daughter.

Unless you can confidently say that “those” people are any less human than your own family, you have no other choice than to embrace them as you would your loved ones. To truly value them as equals.

But it comes with great responsibility. And that may force you to reprioritize how you live.

In one of my past charities, we had the slogan, “Where they become we”. We were constantly having to figure out new and innovative ways of helping people understand that “those people” are just as human as you and I. They, aren’t they at all. They, are us.

We are interconnected. Every action creates a ripple effect around the world. Equally as important, our inaction and apathy are just as profoundly impacting.

Refusing to allow yourself to truly, deeply empathize with people in crisis has a ripple effect that is bringing humanity to it’s knees. The rapid growth of the division of our society is not sustainable. It will crash.

The problem with the potential impact of Let Me In is that American’s (especially) have been so unbelievably desensitized to violence and programmed to devalue or demonize people outside of the US that they can’t even fathom the concept this film is attempting to deliver.

Think about the effect it has on our global society when these tragic wars continue to rage on. The longer it carries on, the more desensitized and numb we become to our fellow humans. When will it be enough? When will it be too late?

I encourage you to take some time to remember that we are all interconnected, derived from the same source, star stuff. And until we embrace that fact, we will be unable to solve the maladies of the world. Because all of them are rooted in the fear that keeps us divided.

Thank Jonathan and Alicia for your courageous love, and for being love.