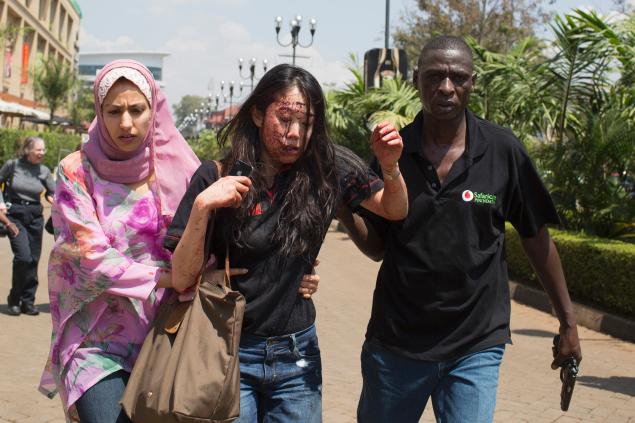 a photo of a friend espcaping westgate {elaine dang, injured by shrapnel}

The Westgate battle is over. 67 lives were taken. Al-Shabab made it clear that their malice and bigotry is both strategic and boundless. If you want to get people’s attention, hit what they care about most; money. How do you do that? Instill fear in the expat (foreign) community that contributes so much to the Kenyan economy.

Al-Shabab knows that scaring out the foreigners (expats and tourists) will do more damage to Kenya than killing thousands of people. Kenya knows it too. Sad but true. This attack was well planed and very strategic. One can only assume this is a sign of what’s to come, not only in Kenya, but across the globe.

Society has perfected the habit of choosing the easiest route back to comfort and perceived safety. Just put it behind you and get back to work. What?

My hope is that this tragedy brings more attention (and action) to the real issues at hand.

But those in power, worldwide, believe they cannot afford to patiently and holistically deal with the root issues that lead to these outbreaks. So they create short term “solutions” like getting back to normal and moving on in order to appease and comfort the general public. Along with it, they conjure up whatever lies suit their short term needs. In time, most people will move on from those too.

People prefer to stifle their fear and get back to business. It’s the standard response to tragedy. We rarely even allow time to mourn. This keeps us stagnant and vulnerable for the next catastrophe to unfold.

If the horrific loss of human life like this doesn’t cause society to pause, contemplate and proactively dismantle the misperceptions that lead to hate and bigotry, what will? When we will stop fighting the issue and start making actual peace? Peace doesn’t manifest from bigger guns.

If you follow the Twitter feeds (not recommended) you can see that there are two very basic, natural and pervasive reactions to this type of tragedy.

Both are symptoms of fundamental misperceptions. We have to start fostering reactions of peace, grace and patience. But these things are so uncommon now that they almost seem unnatural, (which is absurd). Society typically alleviates its responsibility to manifesting these concepts by writing them off as “idealistic” or “utopic”.

This isn’t a religious war. It’s not about Christianity and Islam or Americans, Kenyans or Somalis. This is about who controls the most people. This has provided an immutable platform for thousands of years of war.

Society’s desire for control and comfort continues to trump the value of human life and relationships. Until that shifts, we will continue to experience these atrocities, likely at an exponential rate.

Things usually get worse before they get better.

I am not eager to move on. I’m desperate for a paradigm shift in how we deal with the misperceptions that result in real terrorist acts and all that leads up to them. My heart hurts for the thousands that have already lost their lives to this game society is so willing to engage in and perpetuate.

Should we be so motivated to move on? What’s the real motivation behind that desire? What does that do to prevent these atrocities from reoccurring?

Is there an easy or all encompassing answer? No. But it will take patience. A lot more than we, as a society, are used to exhibiting. Something has to change.

NOTE
I’m not expecting this to be a popular post. I’m well aware that my perspective on these issues is not typically appreciated. Most people will write this post off as idealistic, naïve and insensitive.

I would argue that paradigm shifts are intrinsically linked to idealism. And idealism is only appreciated after it’s proven to work. Prior to that, it’s viewed as naivety.