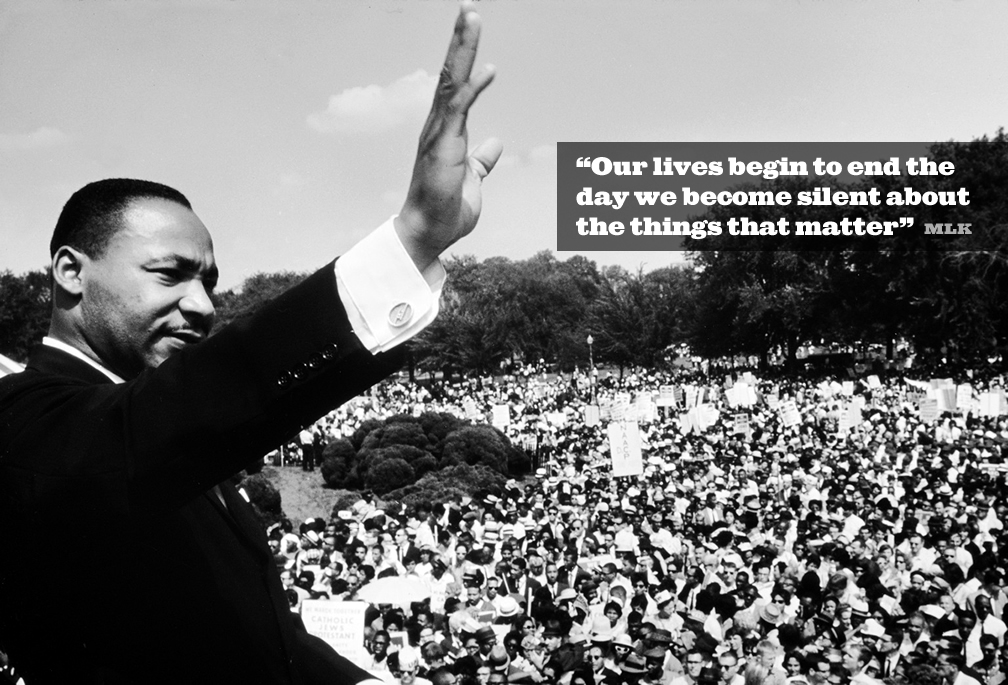 Since August 9th when Darren Wilson took the life of 18 year old Michael Brown, we’ve seen an uprising for racial equality across the nation. I am energized and grateful for the movement we have before us. In many ways, this is the much needed second wave of the Civil Rights Movement.

Unfortunately, almost 50 years after the MLK’s successes, we are still trying to prove that #BlackLivesMatter.

Here are just a few of my favorite speeches/letters from Dr. King. Each is nothing short of profound. They are just as relevant and needed today as they were when they were written.

I Have A Dream Speech {Video} {PDF}

I Have Been to the Mountaintop {Audio} {PDF}

King states the following in his Letter from a Birmingham Jail.

I must make two honest confessions to you, my Christian and Jewish brothers. First, I must confess that over the last few years I have been gravely disappointed with the white moderate. I have almost reached the regrettable conclusion that the Negro’s great stumbling block in the stride toward freedom is not the White Citizens Councillor or the Ku Klux Klanner but the white moderate who is more devoted to order than to justice; who prefers a negative peace which is the absence of tension to a positive peace which is the presence of justice; who constantly says, “I agree with you in the goal you seek, but I can’t agree with your methods of direct action”; who paternalistically feels that he can set the timetable for another man’s freedom; who lives by the myth of time; and who constantly advises the Negro to wait until a “more convenient season.” Shallow understanding from people of good will is more frustrating than absolute misunderstanding from people of ill will. Lukewarm acceptance is much more bewildering than outright rejection.

I believe apathy is the greatest supporting mechanism for tyranny.

King went on to say:

I am coming to feel that the people of ill will have used time much more effectively than the people of good will. We will have to repent in this generation not merely for the vitriolic words and actions of the bad people but for the appalling silence of the good people. We must come to see that human progress never rolls in on wheels of inevitability. It comes through the tireless efforts and persistent work of men willing to be coworkers with God, and without this hard work time itself becomes an ally of the forces of social stagnation.

What type of extremist will you be? I believe, as did Dr. King, that we are extremist no matter what side we choose. And the apathy of the masses is the most dangerous threat of them all.

The United States began the process of banning slavery in the early 1800s. In the 40s and 50s, society rose up again, stating that we must continue the struggle for a deeper societal perspective and application of racial equality. Today, in 2015, the quest continues.

The fight is not over. As Dr. King stated, we cannot simply wait for racial equality to arrive at our doorstep. It has not. It will not. We must strive daily for MLK’s dream to come into fruition. We must realize our individual and collective power and act upon it. We owe it to ourselves, and certainly to future generations.

What will the history books (the real ones, not the ones in schools) say when they reflect back on the 100s of years it took us just to value human life equally? It seems this is a fundamental requirement for a peaceful society.

If observing our social and judicial systems today, one could argue that, that was never the goal at all.

The pervasive lust for power and control seems to have superseded the desire for peace and equanimity.

How can this be? How can we allow this to be? We are, after all, living in a free society. Perhaps its time we exercise that freedom for the good of humanity, rather than just our own personal gain.

Or better yet, trick them into believing racial equality is already achieved.

We are better than that. We must be.

As Gandhi famously posited, you must “be the change you want to see”. It starts with each of us, individually. Start there. Then amplify it through your example and whatever other medium you choose.

Engage. Educate yourself. Stand up for what you believe in. Be the change. Don’t be silent about things that matter.