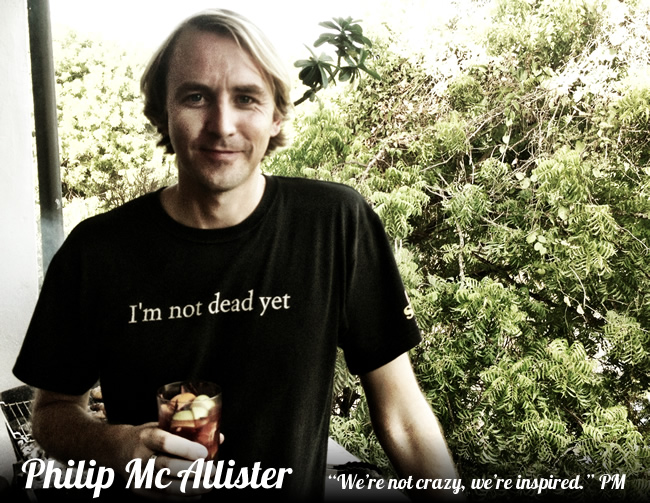 I met Philip almost three years ago on our first night in Mombasa. Ilea and I showed up at his eighth story flat in the center of town. He graciously welcomed two strangers into his home that was already overflowing with life (largely in the form of other travelers that also became close friends). He offered his room because, “you guys are married and it has the best view”. That’s how it began.

The plan was to stay for a couple weeks until we found our own flat. Four incredible months past. We lived so much life during that time. We were happy. All of us. Together.

I love those moments when you’ve just met someone but you feel as though they’ve always been a part of your life. And perhaps they have.

We walked the streets of Old Town late at night through dodgy alleyways to sit on the peer with the Muslim youth. We sipped spiced coffee while sharing stories and soaking in the experience of other cultures and perspectives. We ate marahagwe nazi (beans and coconut) packed full of fiery hot green chilies at the local restaurants for $2 a meal. The filth of the streets saturated our sun-beaten clothes. We take in each nuanced experience to the fullest. This is where we feel most alive.

We lean on each other when the times are tough, as they often are here. We braved the Kenyan elections, terrorist threats and frequent grenade attacks. We bonded and clung to each other.

On Sundays, we spent the day at the beach soaking in the rays and eating coconuts and spiced mangos. In the evenings, we sat on my roof, gazing at the stars and arguing about politics, film, philanthropic methodology and the human condition.

Nothing gets Phil down. He always finds beauty, even in the most devastating and hopeless of times. He exudes happiness and joy, no matter how dire the circumstances. He’s an ardent optimist, so much so that it drives me nuts at times. But more often, it inspires me to have a more positive perspective, to have another look.

He’s visited 82 countries, and I’ve no doubt he’s inspired them all. The experiences he’s had along the way are beautiful, intricate threads sewn into the fabric of his life. He carries the lives of others within him. He breathes that life into the room, leaving a profound watermark of happiness on everyone he meets.

Phil’s generosity knows no bounds. He gives and gives and has no expectation or desire for that kindness to be returned. That’s not the point. He’s not naïve. He does it because it’s part of who he is.

Phil represents so much of what I care about in this world. The other day, in an email conversation, he said, “Stay strong. There are perfect societies in our hearts and minds and in the small human moments of goodness. They have just yet to be realized.” That’s a typical Phil thing to say in the middle of a conversation. I love that.

Phil is living, in the truest sense of the concept. He’s “sucking the marrow out of life”, as Thoreau so eloquently posited. He and his equally whimsical and inspirational Spanish partner, Estrella are a force. She glides. Together they’re captivating. They are an experience; one worth having.

Phil is the “why not?” guy in my life. His influence is liberating. I think that’s beautiful. It makes me want to live life more fully. More full of humanity and love; raw and unbridled. He inspires me to experience more and to do things I’d easily find reasons not to do. He challenges me to truly live.

He’s brought so much love, light and happiness into our lives. Not just mine, but Ilea’s and Francois’ as well. And of course, Saoirse got her beautiful name (meaning “freedom” in Gaelic) from Uncle Phil. I know she carries some of his light within her.

The most important thing in our family is relationship. It trumps everything else. Everything. Phil embodies what that means to us. He makes us better people. He has truly become part of “us”; a part that we cherish. I’m grateful for Phil. Grateful for his influence, his friendship, his perspective and his inspiration.