Since the beginning of the 1760s Industrial Revolution in the United States, society has been moving exponentially deeper into mass consumption. We have the means to create excess easily and cheaply. And just as importantly, we have the ability to influence and brainwash society into believing that excess will bring us happiness and fulfillment.

The Lakota believed that man should adapt his life to the contour and flow of the earth, rather than adapting the earth to fit his needs. But modern society has chosen dominion over harmony with the earth. We’ve lost touch with our innate connection to nature, which plays such an integral role in our ability to truly be human.

There was a time when the night sky, the vast oceans, sprawling desserts, towering mountains and majestic animals once held our attention captive. Today our attention spans have waned to mere seconds and our craving for self satisfaction has become insatiable.

Humans across the globe have transformed their intrinsic value for relationships, awareness, harmony and spirituality into a voracious lust for ease, comfort, status and control over others. We’ve allowed fear to divide humanity to an astounding degree.

We are a culture of war, dominion and mass propaganda. We bomb entire cities of civilians with the click of a button from thousands of miles away. We consume genetically modified foods and copious amounts of processed sugar that make us cancerous and obese. Our school systems stifle uniqueness and creativity by fostering fear and promoting conformation to the status quo. And our economic agreement thrives off our division and belief in scarcity.

Our global perspective is so distorted that the majority of society is completely blind to this profoundly life altering disconnection.

“Maladies such as war, poverty, global warming, human trafficking and the tyrannical nature of our economic system are merely symptoms of a global perspective founded in fear. That fear keeps us divided. Our only path to peace is to resist corporate sponsored fear and develop new social systems founded in our interconnectedness.” ~ Jared Angaza

Today there is a vast library of spectacular documentaries, websites and other resources on that are readily available to anyone that can find an Internet connection, usually with little to no cost. There are life altering films like Cowspiracy, Mission Blue, The Economics of Happiness, Inhabit: A permaculture perspective and scores of others.

There are excellent resources such as Collective Evolution, Brave New Films, Democracy Now and Films for Action where you can gain endless amounts of knowledge of what is going on around the world and how to make a positive impact. YouTube has an endless wealth of information (as well as disinformation…) available to the public. Even Netflix is showcasing revolutionary documentaries that were formerly relegated to websites reserved for extremist activists. 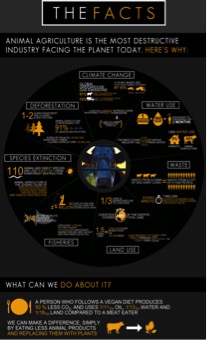 But people don’t want to know the truth. They don’t want to carry that responsibility. The saying “ignorance is bliss” was created for times like this. Once you have the irrefutable knowledge that ANIMAL AGRICULTURE IS THE MOST DESTRUCTIVE INDUSTRY FACING THE PLANET TODAY, it’s difficult to go back to “life as usual”.

Once you consume the knowledge and are no longer ignorant, you are then faced with the choice of altering your lifestyle accordingly or simply choosing to do nothing at all. For many, even the guilt is preferable to adapting their lifestyle to meet the evolving needs of the earth and of society.

Historically, we can see that societies have largely resisted change, specifically redirection or self correction, until ignoring a problem becomes so unbearable that change is vital for basic survival. There comes a point where ignoring or resisting the problem becomes much more uncomfortable or threatening than actually taking the time and mustering up the fortitude to deal with it.

But I believe a global shift is upon us.

We have more than enough information to understand what we have done and are currently doing to destroy the planet and to foster a fearful, disconnected society. We have more free flowing information, communication and transportation to connect the world than ever before.

The movement is gaining momentum. It’s not just the hippies screaming about peace and love anymore. It’s not just the zealous activists raging against the machine. This knowledge is quickly permeating the fabric of our society. It’s becoming too difficult to ignore and too easy to contribute to positive change.

Unfortunately, society is far more concerned about their financial and social status than they are the destruction of humanity and our planet. But I believe there will soon come a time when the choice to reject these “alternative lifestyles” becomes detrimental to one’s social and economic status.

As an activist and strategist, I believe that is the link we have to make. The new role of an activist is to promote these alternative lifestyles to the masses and make them more easily accessible and sexy than the current status quo.

If you want to influence people, come to them where they are at. Speak their language. Remember the tactics that convinced them that mass consumption was a path to happiness. Then use those tactics to provide an alternative path.

The newest role of the activist is to alter the perspective of our global society. The shift we desire will only be realized once the masses view a more harmonious lifestyle as being sexier and easier to attain than our current methods.

*There are endless resources for alternative lifestyles that promote a more interconnected and harmonious society. I’m currently building a database of films, websites, organizations and movements. Please add your additions and suggestions in the comments section below!